This guide is available for MacOSX and Ubuntu. Click the links to jump to the section of interest.

Our local development environment is build on docker, to achieve:

One image is worth a thousand words, so here follows a simplified depiction of our local environment model: 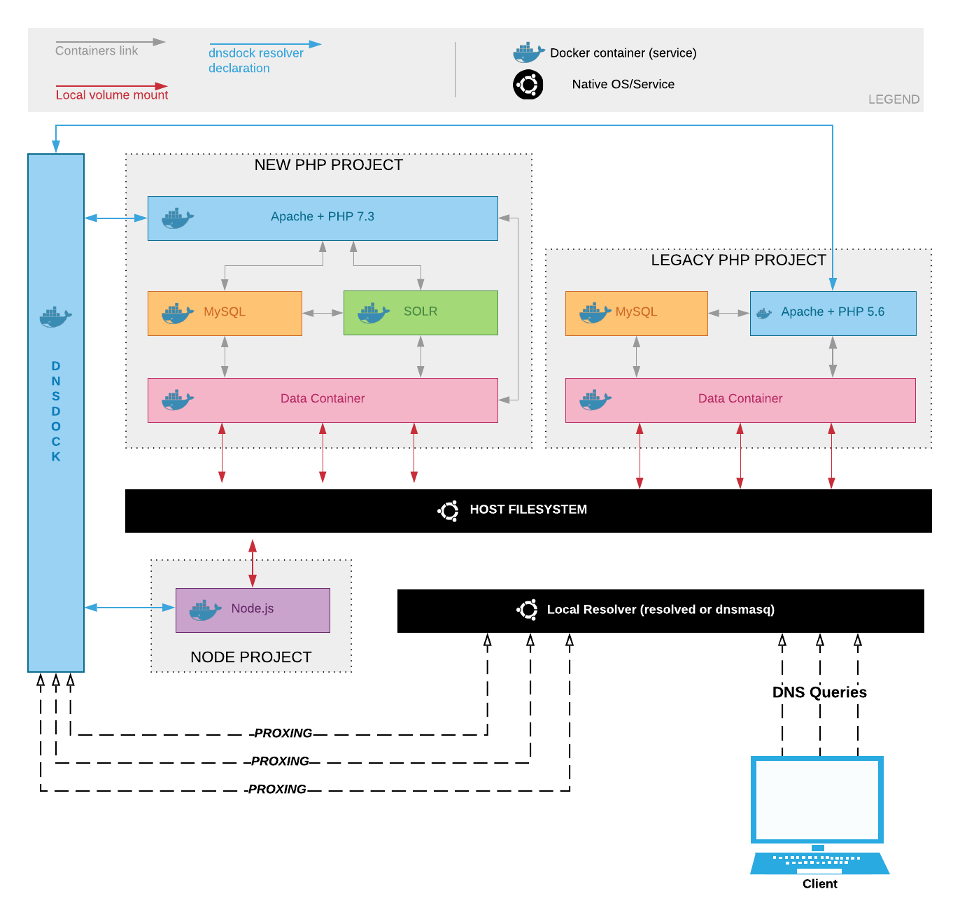 Basically, what we've got here is a set of containers, partaining to different projects. They are inerconnected via docker links so that each project has its own service: for example both Drupal projects in the image have dedicated MySQL and Apache/PHP containers, perfectly isolated. They can be stopped and started at will on a "by project" basis.

To keep containers sets isolated we rely on docker-compose, a simple orchestrator that's easy to configure and run locally.

To reach each entry point, that in case of web applications is the HTTP server that exposes the app for that project, we need a resolver able to dinamically map containers to URLs when a container is started or stopped (mind a container IP is inherently dynamic so a static map won't do).
This role is carried out by a containerized service called dnsdock, that does exactly this.

The last ingredient consists in a local resolver able to inform the system to proxy the calls for a given TLD (.loc in our case) to dnsdock. This is a peculiar idiosincracy of Debian/Ubuntu which resolvers are managed dynamically by network-manager service (and it's better to leave it that way to avoid many headhaches).

In particular MacOSX scheme is a bit different. Since MacOSX's kernel can't run native Linux containers, we'll need to run Linux in a virtual machine. For consistency, our choice is for Ubuntu Server in VirtualBox, provisioned automagically by docker-machine, a useful command of the docker suite to provision and control a remote docker host as it was local (remember the docker command is a CLI client).

On MacOSX the local host resolver is the one native to MacOSX itself, while the rest of the stack runs in a VM, where the Linux distro acts only as a containers-provider.

If you need to re-run dnsdock or dinghy-http-proxy for some reasons (maybe you have delete the pods), you can rely on sparkdock scripts:

You should have it in your system, but in case of missing:

The guide for MacOSX is maintained by Paolo Mainardi

This will provision a VirtualBox VM ready to use and will do most of the configuration required to access containers from outside the VM. Also dnsdock container will be created and activated.

After installing Docker Toolbox, use the terminal to create a new Docker machine using this command:

Adjust the settings according to your system; the command above specify:

At the end of the installation use the docker-machine ls command, and you should see something like this:

Now you should add to the init script of your shell sessions something that automatically loads environment variable needed in order to connect to the dinghy machine. Add this lines to your .bashrc or .zshrc:

Install dnsdock with this command, that will create a container that will always start once the dinghy machine starts:

After either manual or automatic installation, it's recommended to manually configure and test network setup.

Or if you are using the sparkfabrik starterkit, just run:

Test that everything is working as expected, by issuing these commands:

Upgrade from Docker 19.03 to a recent version

This chapter is intended to be executed on a Ubuntu 20.04.x machine.

If you have an ubuntu provisioned machine before the Februrary 2021, it is possible that you are still using an old version of Docker.

In order to upgrade it:

At the finish of this process you will have the Docker PPA installed and a version higher than 20.10.1.

You must now enable Docker buildkit as the default builder, to do that you must export the following variables in your local environment.

Just place them under your .bashrc or .zshrc (it depends on what shell you are using).

In order to install Docker, follow the official documentation at Docker's website. Instructions are available for all famous distros.

Here the documentation for Ubuntu users.

IMPORTANT: Make sure you also follow the instructions at the chapter "Create a Docker group".

HINT: On Ubuntu the official docker-engine package you just installed creates the docker group for you. You must ensure your user belongs to that group. You can do it with:

Docker compose is a binary command which is not packaged for each individual OS/distro. Installing it is as easy as downloading the last binary in a shared executable path. Issue those command as root on Ubuntu, no matter the version of OS you are running.

IMPORTANT: since you need a superuser complete environment, run the following commands as root, like with sudo su

dnsdock is a service which is automatically instructed by the docker engine every time a container is started with the option -e DNSDOCK_ALIAS=<your.url.here>. Being it a Linux service we can leverage docker to install and start it without messing around with packages or such (nice uh?).

HINT: Make sure your user has been added to the docker group.

Run the container that will host dnsdock service

Issuing this command, docker will:

If you run into trouble due to port 53 being bound on the network, don't warry and read along.

NOTE: Ubuntu 18.04 LTS is the current recommended version. for which the following is not necessary. Should you need to configure a legacy version of Ubuntu (14.04 to 16.04 LTS), jump to the correct paragraph.

With the migration to systemd, Ubuntu 18.04 adopted the systemd-resolved service. This is a sort of catchall, multiprotocol name-resolving system that also provides a stub for DNS resolutions for local traffic.

The piece basically sits where dnsmasq used to in former OS versions. Sadly resolved configuration is nowhere as clean and powerful as dnsmasq, leading to two minor problems.

The good news is that the procedure is simpler than dnsmasq configuration. Just create this new file /etc/systemd/resolved.conf.d/dnsdock.conf as superuser with the following content:

As mentioned above, resolved and dnsdock may end up in a deadlock. The effect is that your OS won't be able to resolve new containers started with docker-compose. Restarting the services will suffice to make things work again:

Too bad this requires to provide superuser password.
You can alias this command to something mnemonic (say bazooka) so that fixing things will be easy. You won't regret having this alias.

NOTE: This part of the guide works on Ubuntu from LTS version 14.04, up to 16.04+ LTS. The current recommended version is 18.04 LTS, for which the following is not necessary. To properly configure 18.04 LTS, jump to the correct paragraph.

Ubuntu 14.04 to 15.10 natively relies on dnsmasq a great and simple dns-proxy which allows for very elastic configuration of the networking stack. Most of all, dnsmasq plays very well with resolvconf, a very dull daemon which controls local resolution maps to make sure dynamically created networks never run into conflicts with each other.

Ubuntu 16.04 ships with a default dnsmasq configuration in the /etc folder, but the service itself is not installed by default. If you are on this OS version or if for some other reason you don't have dnsmasq installed, go forth and install it right away (don't worry, it's completely preconfigured to work transparently on a stock Ubuntu).

While Ubuntu subsystem works really well, it doesn't play along with dnsdock, since dnsmasq binds on port 53/udp on 0.0.0.0.

This can even prevent docker from exposing 53/udp on the container interface. To avoid this we need to create a proper configuration for dnsmasq so that it ignores docker interfaces and leave its port 53 alone.

In addition we need to instruct dnsmasq to proxy all queries to .loc TLD (which we use to resolve local domains in our projects) to dnsdock, which keeps the zone records for the dynamically created containers.
That way, we can avoid messing around with the complex Ubuntu's networking stack and make dnsmasq know who to ask for .loc domains.

Since we don't want our configuration to be replaced in case we upgrade the system or dnsmasq service, we'll create a partial configuration in /etc/dnsmasq.d/dnsdock-resolver (it's a new file so nano or vim it as root).

Put what follows in that file:

The first line tells dnsmasq to proxy all queries for .loc domains to dnsdock, while the second tells it not to bind to `docker0' interface, which is the one that holds all containers IPs.

HINT: if you followed provious steps and had dnsmasq already running, you may have to kill and restart your dnsdock to make it bind to the now available port 53 on docker0 interface:

HINT: if you have a local stack installed for other reasons and need to resolv a subset of .loc domains to localhost you can change the above configuration this way

To test everything is working as expected, we'll try to run a service in a container, exposing it through a local URL.

Do NOT execute as root, use your user to run containers

If all works, clean the test container and remove its image with